I met Alex almost a year ago, when he commented in despair about being a hidden atheist in Saudi Arabia on one of Richard Dawkins’ tweets. It caught Richard’s eye and he sent me a screen shot. (I had already begun working on my book, Losing Your Life to Save It.) I was able to contact Alex through Twitter (I gave him the name Alex) and we chatted online for months. Eventually he told me that he was saving money and arranging to travel to another country to seek asylum because he lived in constant fear of discovery and his parents were beginning to suspect – sometimes he made mistakes in trying to follow Islamic practices after he stopped believing.

He entered Germany legally but as he declared his intent to seek asylum at that border, he was immediately put into a refugee camp. His phone was damaged at the camp making communication very difficult.

His claim was denied and he is appealing his denial and asking to be permitted to stay in Germany. Because he arrived with money to support himself he was not given the usual government financial support provided to nearly all asylum seekers. His application was denied six months ago – they wanted to send him, a known atheist, back to Saudi Arabia where apostasy is punishable by death and atheism is legally defined as terrorism – because the interviewer did not believe he has left Islam and felt that there was no reason Alex couldn’t simply return and begin to practice Islam again.

He began the long appeal process with the help of Atheist Refugee Relief but has completely depleted the money he brought with him and the camp he has been recently transferred to does not provide food, unlike several of the previous refugee camps he’s been living in.

He hasn’t been able to obtain the documentation (Saudi bank info) he needs to prove to the government that he’s out of money, so the initial determination that he didn’t need financial support can’t be changed yet.

I’ve set up a fundraiser and am splitting the money raised between Alex and the organization that has been able to obtain a lawyer for his appeal, as well as help with some other services.

Hopefully he’ll be able to access the proper bank documentation soon and get government assistance.

Ideally his application will be accepted and he’ll be able to work to support himself – going back to Saudi Arabia is utterly unsafe.

Either way he needs to eat now and this money will be a temporary stopgap measure allowing him to purchase food and other basic living expenses – like transportation to purchase food. It will help reimburse the German charity that’s been helping and free up to help other secular and atheist refugees.

(After a certain point funds raised will be split between three charities.)

Please consider whether you can donate a bit to help Alex and the groups that help secular refugees that often don’t have safe access to religious organizations that provide aid to they coreligionists.

P.S. Whatever happens, he’s all in. Alex got this tattoo when he arrived in Germany! 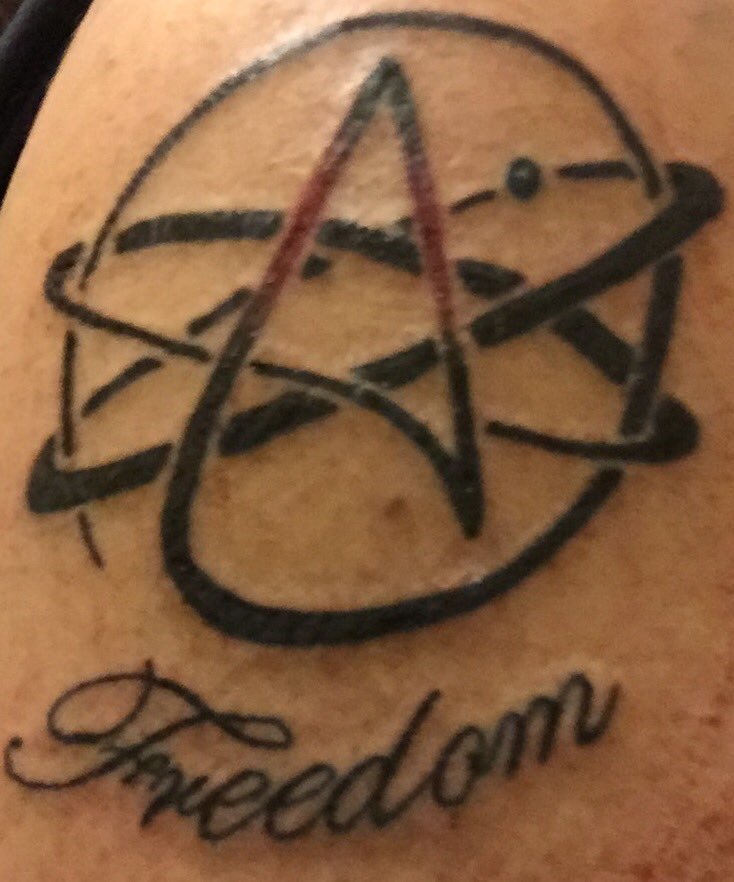