It’s late – 1:30 AM – and I haven’t done a lot of editing on this, but I’m going to post it regardless. As usual, please feel welcome to comment, criticize, poke holes, etc. Just keep it constructive.

I just watched, and shared, the following video by the fictional British reporter Jonathan Pie as he angrily criticizes the recent judge appointed punishment for a Scottish YouTuber known as “Count Dankula.” The guy did a joke in piss-poor taste and taught his girlfriend’s cute little pug dog to do a Nazi salute to a cue of “do you want to gas the Jews?,” took a video, and shared it on the internet & it took off. Take a moment to watch the several minute video response by “Jonathan Pie” below (Lots of swearing, btw.)

"We are not allowed to make fun of Nazis in case it's misinterpreted." The judge said context and intent are irrelevant. I find this frightening. https://t.co/wxHHBCtksT

Freedom of speech is not a joke: https://t.co/sHP6vUjjKQ

Did you watch it? Ok, you’re ready to read the rest. I’ll say right off the top, that I don’t share the sense of humor of Count Dankula and I think his joke really sucked. I can completely understand the anger and frustration people feel when they see “jokes” like this that seem to poke fun at topics that have really hurt people and affected their lives. I would not make a joke like that myself and I would be hard pressed to find it amusing, other than for shock value. But a jail sentence for making a joke? Or for having an unappealing, or even an appalling, sense of humor? I don’t think we should be jailing people for being tasteless or insensitive, especially when it’s clear that we misunderstand the intent of others all the time.

The uproar and upset surrounding Count Dankula (from the pro-punishment folks) is a bit like the uproar when Richard Dawkins said “When I see cattle lorries, I think of the railway wagons to Auschwitz” and people said he was comparing Jews unfavorably to sub-human cows, when he was clearly, in context, suggesting we might eventually find we’ve been committing an awful crime by assuming cows are lesser beings & covering our eyes – much like happened to Jewish people as a whole. CONTEXT!  In both cases, people declined to consider the intent and context and that caused real problems. We must stop thinking this way! Context and intent MUST matter. What are words and actions without context?

Considering the context of the video Count Dankula makes it is hard to imagine that he could seriously be advocating for anti-Jewish or pro-Nazi sentiment. Some people think it isn’t okay to joke in any way about something as serious as Nazis at all, or even mention the Holocaust, out of respect for the tremendous numbers of people who have suffered. I personally agree that it’s insensitive and upsetting to downplay or minimize, the ideas and effects of Nazis and white nationalists, but “okay” as in permissible? Yes, it is. Why? Because unless everyone can decide unanimously what constitutes offense, there is no way to set a fair, enforceable standard. Offense, and humor, are always subjective – and they are often two sides of the same coin. And everything is akin to “blasphemy” to somebody else.

Everything is akin to “blasphemy” to somebody else.

This kind of persecution of people who offend but don’t commit a crime is frightening because it is related to the way people, and governments, use “blasphemy” rules and laws to punish people who step outside the bounds of what is acceptable. I don’t think it’s good or fair for people to say that atheists have no morals, are evil, are spawn of – or tools of – the devil, or that we should be “hunted down” through law enforcement. But aside from aiming to persuade them that they might be wrong & trying to shift the Overton window, I’m not going to prevent them from saying those things unless they are actively trying to make someone hurt or damage me, or other atheists, in some tangible way other than hurting our feelings. (Click to see a recent example, and a measured rebuttal.) I’ll fight an

d advocate for secular laws that treat everyone the same, but I’ll also fight for the right of religious people to continue to hate me – as long as they can’t legally treat me badly and I’m still able to oppose their viewpoints with my own.  (In the case of the government Minister in Malaysia who wanted to use the law to hunt down atheists – that should be fought: to change the law, not force him to change his beliefs.) 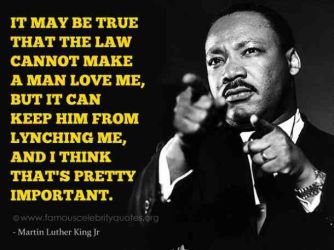 On the other hand, religious folks of many stripes actively try to shut down the statements and voices of atheists because we offend their religious sensibilities. In many places, they do more than shut us down – we can be killed! This is not acceptable. Yet, when we allow punishment for words or actions that hurt our feelings or make us uncomfortable we legitimize the idea that “blasphemy” exists. But no idea is inviolable.

When the person being punished is being punished for something that goes against what I personally think is right, then I might find it feels good that they are being punished. I might feel that they deserve it. If I’m in a group of people who think the same way that I think, then it’s easy to point a finger at the outsider and say they are wrong, or even bad. We are in a society now where many of us, indeed hopefully most of us, have seen that the things that Nazis and Hitler stood for and did, caused incredible and lasting damage in our world and that there are still people who are threatening to bring back those same ideas now. That is a real concern. But CONTEXT and INTENT are so important! If we ignore those things, then essentially no one is safe from punishment. Every misunderstanding, every intentional misconstruing, is a source of danger. We lose the ability to be able to challenge ideas currently in vogue, or in power. What happens when the power shifts to a group that we disagree with?

And those who enforce and ask for such laws seem to assume they will always be the ones on the right side of it, whereas history shows these things always spread and claim everyone in the end.

In the United States we have a president that many of us oppose because we strongly dislike his behavior, his actions and many of his attempts at policy-making. We have the right to criticize our president and also the ideas of people who support him, and they have the right to criticize us back. It might make for a more civil online experience – most people are a lot nicer in person – if we weren’t allowed to say anything that offended others, but it certainly wouldn’t advance meaningful conversation because we’d simply stop having the difficult conversations. How is that good? (You tell me, because I don’t think it is. It would also be helpful if we all stopped thinking that our ideas are the same as our identities & stop taking everything personally. Anyhow.)

Is Dankula actually an anti-Semite/pro-Nazi? Or is he just a jerk with a twisted sense of humor? I don’t know him personally so I don’t really know. But what he did shouldn’t be considered a crime even though we should be free to think it was awful – or not.

I didn’t link to any articles about Count Dankula because they are easy to come by and I don’t have the desire to read a bunch of them to vet them for accuracy.

Incidentally, I found the following story in a comment while browsing Twitter this evening, and it is an example of actual historical Nazis finding a very similar joke very offensive – to Nazis! Read Hitler Pursued “Hitler Salute” Finnish Dog (and notice the publication date on the story – it’s not recent.)

In a similar vein as this situation: I just watched part of Ricky Gervais‘ new comedy show Humanity, and I found his bit about Caitlyn Jenner to be in very poor taste and as someone who has several trans friends, I personally didn’t find it funny – cringeworthy and unpleasant. Did it make me want to keep watching his show? No, it really didn’t. But I find I can understand the perspective of someone who does find it funny – or at least understand that people exist that do. I may not like it, but that doesn’t mean I should get to prohibit them from thinking it’s funny, or Gervais from saying it in the first place. But Caitlyn Jenner is a long-time public figure being made fun of by another public figure – a comedian. I want to be clear that I would not quietly tolerate the same type of joke being made at the expense of a friend in my presence, but would speak up and make my own opinion heard and challenge the person if at all possible. In this case, I decided not to watch the rest of the comedy show because my enthusiasm for it had dimmed.